Today I learned about Anonymous

a leaderless movement that has worked tirelessly to oppose all forms of Internet censorship worldwide, from DMCA abuses to government mandated content filters. Our initiatives include supporting dissenting groups in Iran, Zimbabwe and Tunisia, as well as waging the highly visible information battle against the Church of Scientology.

I don't think I have ever been passionate/principled enough to  join a protest. I have (by random timing) been in an Anti-Iraq demo in Trafalgar Square, UK. But we were merely caught up in it. I have signed petitions and donated to causes. But now I am feeling like I should be taking a stand. 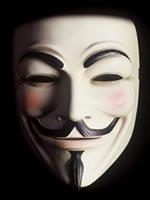 Wikileaks, freedom of speech, accountability, truth and trust are all huge topics in the blogosphere. They are making headlines in all media formats. They are fundamental in our lives. Without them aren't we living in a modern dictatorship. One where we are told what is truth, what is good for us, who to fear and that breaches of human rights and freedom of speech are permissable.
I didn't join in the protest today... purely because Monkey was scared of the masks when we watched the video. But I am hoping to get another chance soon.
I am tired of being a slacktavist and I don't think I have the skills to be a hacktavist. My start has been to not support paypal and visa. Small steps...
Posted by LatteJunkie at 21:31