Well, we picked the most exciting weekend to go to Taupo! (or Stud1s work did). Very long post - get a cup of coffee ready :D

The drive up was mostly uneventful. Monkey was a star over the five hour journey. I had packed a travel kit which I think helped distract him. He had a bit of a play halfway when we stopped for coffee. But all in all - he made the it the whole way without dramas!

We arrived at the hotel and found that we had been booked a double room for the four nights. That is - two double beds and a bathroom. No separate room for Monkey. We decided that we would make it work and went for a swim in the thermal pool. Just as we were heading out to dinner though, we bumped into the HR lady from Stud1's work and asked if there was a chance we could be moved to a family villa. There wasn't. So they upgraded us to an executive suite! Sahweet! I was in love with the room - it came with a spa bath. Monkey loved it due to the novelty of having his bed being a sofa-bed. 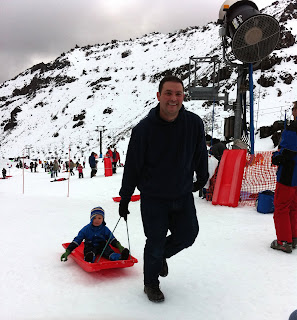 The weekend was well organised and they did a brilliant job at getting the right balance between business and family fun. Monkey loved the children's parties and we had fun at the grown up dinners too! They even organised a babysitter. Monkey got on well with her and outed her for letting him watch TV and drink milk before bedtime :).

On Saturday morning we ventured onto Whakapapa Ski Field. (Only after buying new gumboots - they don't dry too well after being rinsed by a 3 year old in the basin!) It was our first time on a ski field and we loved it. My favourite part was the ski-lifts! Monkey and Stud1 even went sledding down the kiddy slopes. (thanks to LS for taking photos)
I honestly thought that it was the most snow I had ever seen in one place.


I was so incredibly wrong. As the weekend wore on we started hearing about the Polar Snap that was due to hit the country. In Taupo the sun was shining and we were hearing things from down south about heavy snow and sleet. We woke on Monday to a dusting of snow and had breakfast watching it snow gently on the camellias outside the restaurant.

It didn't look that bad. Until we tried to leave. All the roads out of the area were blocked. So we ended up staying another night, feeling like frauds due to the sunshine and stunning views of the mountains.

Today we finally got out, left the sunny but bitterly cold central plateau behind and headed down into the most snow I have ever seen. We couldn't stop for photographs as we didn't want to get stuck in the snow without mobile signal.

We drove through rolling fields of white, passed tree ferns dripping icicles and watched little lambs jumping in the snow. Then it started thinning and we thought we were out of the worst... Again we were wrong. As we entered the Wellington region it started raining, which turned to sleet and then snow. We drove along the coastal road watching it snow into the sea. We made it home, just missing road closures and in awe of the amount of snow that has fallen in our area.

I will take photos in the morning, I am too shattered after the seven hour journey home.

New Zealand has had an epic snow-dump. There has been snow to sea level across both islands. Snow has even fallen in the very north which is a sub-tropical climate.

Email ThisBlogThis!Share to TwitterShare to FacebookShare to Pinterest
Labels: Snow