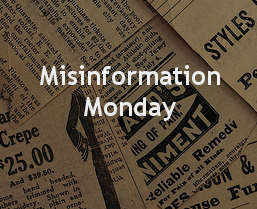 Welcome to the first week of Misinformation Monday.
Let's start making stuff up and selling it as the truth! Grab the button and join in! Use the cool linky thing and link up!

How did the dinosaurs die?

The cavemen had just invented chocolate. Everyone, especially the dinosaurs, loved chocolate. Soon after the invention of chocolate, tooth-sticks were made (bristles came much later). It was necessary because of the increase in tooth decay which in turn lead to the loss of teeth, the invention of the Tooth Fairy and an inability to eat anything but bananas which didn't grow in the region.

The cavemen brushed their teeth and saved them. They offered them to the dinosaurs but due to the lack of opposable thumbs and very short arms, they couldn't reach their mouths and they ended up dying of hunger.

Cavemen scientists tried very hard to come up with a solution but ladders hadn't been invented yet.

Or for an even better white lie...