We were up bright and early in what seemed like the middle of the night. That would be due to the fact that 3:30AM is the middle of the night!
It took two of us to wake Monkey, he was cuddled up snugly and quite adamant that he didn't want to venture out into the cold. But with a whisper of “plane day!” he hopped out of bed and got dressed without too much drama.
I felt really sad leaving. I love my home, I feel safe there. I managed not to cry and got in the taxi and drove off into the unknown.
The airport was much the same as any airport around the world... It is smaller than most international airports and is very compact and the runway is in the middle of two bays, so on your first flight in you will think you are going to crash into the sea at the end of the runway!
Luckily for us, it was an easy check in – only had to shuffle one or two things out of one case into another to make the 23kg limit and a nice man found us some special tape to tape up the case that decided to split a seam! It wasn't even the full one! 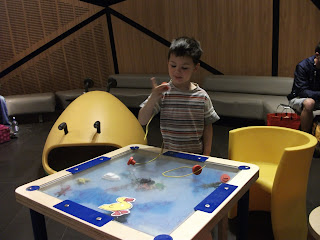 After that we wandered through customs, Monkey smiled at all the dog handlers and got smiles back and we got to the Rocks... It's the new terminus which looks a lot like an oversized armadillo. It is home to Mojo who made us a great flat white and fed us truly delicious muesli... Their other claim to fame was a play area – it made the hour and a half wait much easier.
When we boarded the plane Monkey (and me) were thrilled to find that we had inflight entertainment. It meant that all my pre-planned inflight entertainment didn't see the light of day. It did however mean that I was able to watch most of Water For Elephants with out too many interruptions and Monkey watched all of his favourites. I am never flying budget again!

We arrived to a beautiful sunny Sydney morning. The hotel couldn't check us in until 2pm so we had to wander around the mall. It is probably not the biggest mall ever but in comparison to the one back home in the Hutt... It's massive – 8 levels over 2 blocks.... I've been there daily to get internet, banking, groceries and coffee sorted and I still get lost. I still find shops I have never seen and can then not find again. 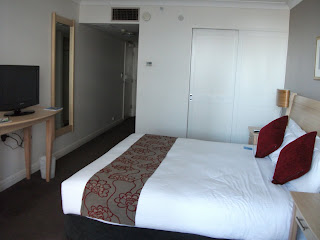 Somehow we made it through to the check in time.... It was hard going. We had been up for almost twelve hours with the two hour time difference. I was ratty, Monkey was beyond overtired and on his way to psycho giggling in the corner and Stud1 was getting quiet. The concierge to pity on us and let us crash in one half of the apartment while the attached studio was being cleaned.

Email ThisBlogThis!Share to TwitterShare to FacebookShare to Pinterest
Labels: Sydney